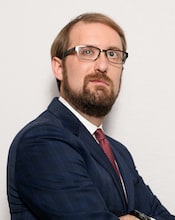 Austin P. Campbell is a Trial Attorney in the Dallas office of Rob Wiley, P.C. Since joining the law firm in 2016, Mr. Campbell has spent his career assisting employees with a wide range of work-related issues—everything from combating illegal discrimination to obtaining unemployment insurance and resolving contract disputes. His day-to-day practice has centered mainly on helping individuals with claims involving age and disability discrimination, reasonable accommodations, Family and Medical Leave Act (“FMLA”) interference, and various forms of unlawful retaliation.

While protecting his clients’ rights in both state and federal courts, Mr. Campbell has represented employees in numerous mediations, depositions, and hearings. Mr. Campbell acted as lead counsel in an arbitration and a week-long Equal Employment Opportunity hearing for a federal worker. He also advises employees on negotiating severance agreements and how to navigate administrative processes, such as those required by the Equal Employment Opportunity Commission, the Occupational Safety and Health Administration, or the Texas Workforce Commission. In pursuing his clients’ claims, Mr. Campbell has stood up to employers as varied as Fortune 500 companies, startups, federal agencies, cities, and school districts.

Mr. Campbell received his Juris Doctorate from Vanderbilt University School of Law in Nashville, Tennessee, in 2016. At Vanderbilt, Mr. Campbell was on the Dean’s List and was an Articles Editor for the Vanderbilt Journal of Transnational Law. The journal published his student note, an article entitled Riding a “Friendly Elephant?” How African Nations Can Make the Best of Economic Partnership with China, in March 2016.

Mr. Campbell discovered a passion for helping people seek justice in the often-challenging world of employment law at Vanderbilt, where he was a member of the Labor and Employment Law Society and the Civil Practice Clinic. In the Civil Practice Clinic, under the supervision of a professor Mr. Campbell assisted people who might not otherwise have been able to afford legal services with a variety of issues, like obtaining Social Security Disability Insurance. At Vanderbilt he also participated in mock trial and the school’s moot court competition. While in law school, Mr. Campbell served as an intern for federal District Judge Jorge Solis in Dallas, and Senior District Judge John T. Nixon in Nashville. He also served as an intern for Tennessee Criminal Court Judge Monte Watkins, and with the Tennessee Attorney General’s Office.

Mr. Campbell graduated Phi Beta Kappa from Emory University in Atlanta, Georgia, where he received a Bachelor of Arts in Political Science and Economics. At Emory, Mr. Campbell was a contributor to the student newspaper and active in the Fencing Club and Model UN. Both in law school and college he volunteered with numerous organizations, especially those devoted to helping shelter dogs and cats. He enjoys spending time outdoors—especially biking, running, and swimming at the lake—and is an avid reader and concert-goer.

While originally from North Carolina, Mr. Campbell grew up in Plano, Texas, and graduated from Plano Senior High School.

Article: "Riding a “Friendly Elephant”? How African Nations Can Make the Best of Economic Partnership with China, by Austin P. Campbell

Practice Areas
Submit Your Case
Client Reviews
★★★★★
I would recommend the Law Office of Rob WIley, P.C. to anybody needing assistance with employment rights. They did an incredible job of handling my case professionally and in a very resonable time frame. In my initial consultation with Rob Wiley I was given a very straight forward analysis of my claims after which Fadi Yousef was the attorney assigned to my case. Working with Fadi was the best. He showed care and a true concern for the direction and result of my lawsuit. Fadi was always available and was in constant communication with me throughout. I thank Fadi Yousef, Rob Wiley and his team for doing a phenomenal job, they were an absolute pleasure to work with. R.G.
★★★★★
Mr. Wiley thoroughly reviews my documents and gave me great advise and put my mind at ease at a touch time. Easy to schedule and great office staff. A.S.
View More
Submit a Law Firm Client Review