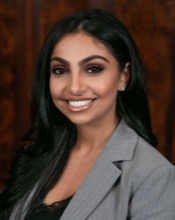 Rasha Zeyadeh is a trial attorney in the Dallas office of Rob Wiley, P.C. Ms. Zeyadeh is an aggressive advocate for employee rights who understands that workplace disputes can be the cause of one of the most stressful times in a person’s life. Ms. Zeyadeh is dedicated to ensuring that her clients’ rights are protected, and that justice is served.

Ms. Zeyadeh represents employees with various claims, including claims brought under Title VII of the Civil Rights Act of 1964, The Family Medical Leave Act (FMLA), The Age Discrimination in Employment Act (ADEA), the American’s with Disabilities Act (ADA), the Fair Labor Standards Act (FLSA), the Texas Health and Safety Code, Section 1981, and Section 451 of the Texas Labor Code. Ms. Zeyadeh also represents employees in governmental administrative proceedings, including those held before the Texas Workforce Commission, the Occupational Safety and Health Administration of the United States, the U.S Equal Employment Opportunity Commission and the U.S. Merit Systems Protection Board. Additionally, Ms. Zeyadeh represents employees in appeals to the Office of Special Counsel and the U.S Equal Employment Opportunity Commission. When not advocating for her clients in state court, federal court, or in administrative proceedings, Ms. Zeyadeh can be found negotiating severance agreements and contract terms on behalf of her clients.

Following her undergraduate education, Ms. Zeyadeh went on to receive her Juris Doctorate from Texas Tech University School of Law, where she graduated cum laude. During her time at Texas Tech University School of Law, Ms. Zeyadeh demonstrated the ability to balance academic commitments and extracurricular activities. Ms. Zeyadeh excelled academically earning the Distinction Award in both the Study of Trial and Appellate Procedure and Criminal Defense. She was also recognized as the 2017 Law Student of the Year by the National Jurist and the 2017 Graduating Law Student of the Year by the Lubbock Bar Association. Ms. Zeyadeh was also inducted into the Who’s Who Among Law Students in American Universities and Colleges program. Ms. Zeyadeh’s achievements and work ethic were recognized by many, earning her the Judge Lucius Bunton Endowed Scholarship, the Judge Meade F. Griffin Award, and the Judge Ken G. Spencer Award.

Ms. Zeyadeh proudly represented Texas Tech University School of Law as an advocate. She served as the Director of Trial Advocacy for the Board of Barristers and competed in several mock trial and moot court competitions throughout the country. In her second year, Ms. Zeyadeh won the National Southwest Mock Trial Competition and received the Hunt for Excellence in Advocacy Endowed Scholarship. Most notably, in her third year, Ms. Zeyadeh was inducted into the National Order of the Barristers.

Ms. Zeyadeh also believes in service to the community. She logged over 100 hours of pro bono work during each of her three years of law school, earning her the “Dean’s Award” recognition on the Texas Tech Law Pro Bono Honor Roll, as well as admission to the Law Student Pro Bono College of the State Bar of Texas. Ms. Zeyadeh was also a PSJD Pro Bono Publico Award Top 7 finalist in 2015. Ms. Zeyadeh has volunteered at various organizations including the Innocence Project of Texas, the South Dallas Clinic, and the Texas Legal Services Center. Most notably, Ms. Zeyadeh served as a student-attorney in the Criminal Defense Clinic of Texas Tech University School of Law, where she represented indigent clients criminally charged in cases ranging from misdemeanor possession of marijuana to felony aggravated assault. Ms. Zeyadeh’s commitment to working on behalf of underrepresented people and causes has earned her the Clifford W. Brown Lubbock Criminal Defense Lawyers Association Award, the Brendan Murray Criminal Defense Endowed Scholarship, and the Tim Cole Endowed Scholarship.

Ms. Zeyadeh is Palestinian and grew up in Amman, Jordan. She recently became a naturalized American Citizen. Her journey to the American dream caught the attention of the Department of Homeland Security – U.S. Citizenship and Immigration Services, who have asked her to become a regular keynote speaker at various naturalization ceremonies.

Ms. Zeyadeh is fluent in Arabic and English.

Ms. Zeyadeh understands the strife of underrepresented communities and takes pride in her ability to be the voice for those in need. To Ms. Zeyadeh, being an attorney isn’t just a job, it’s her calling.

Fort Worth Chapter of the Society of Human Resources Professionals- "Valentines Day at Work: Cupid or Stupid?" - Fort Worth - February 14, 2019

Contact Us
Practice Areas
Submit Your Case
Client Reviews
★★★★★
I would recommend the Law Office of Rob WIley, P.C. to anybody needing assistance with employment rights. They did an incredible job of handling my case professionally and in a very resonable time frame. In my initial consultation with Rob Wiley I was given a very straight forward analysis of my claims after which Fadi Yousef was the attorney assigned to my case. Working with Fadi was the best. He showed care and a true concern for the direction and result of my lawsuit. Fadi was always available and was in constant communication with me throughout. I thank Fadi Yousef, Rob Wiley and his team for doing a phenomenal job, they were an absolute pleasure to work with. R.G.
★★★★★
Rasha, Eric and Rob did it again a Second time around! I'll admit, they are truly the BEST employment lawyers out here in the Metroplex! Not only they won a case against my previous employer, they also won my unemployment insurance (UI) case as well! It is such a relief and a huge burden off my shoulders about not worrying how I'm going to pay my bills now and provide food for my family. I can't say enough how awesome they are and how far they go to make sure you are taken well care of. Thank you so much Rasha, Eric and Rob for all that you did for me! J.T.
★★★★★
Rasha Zeyadeh and Rob Wiley provided a very professional and comfortable experience. My case was tough being in Texas, but, Rasha worked very closely with me to get the best result possible. She was extremely open to listening to my concerns and suggestions, while using her expertise to guide me to the best result in my case. I would definitely recommend Rasha and Rob Wiley if you are in need of their type of service. I will use them again if needed! K.G.
View More
Submit a Law Firm Client Review